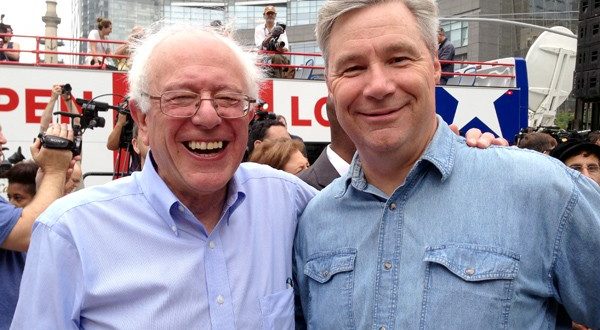 WASHNGTON, May 9 – With public support for unions at 61 percent, the highest in 15 years, Sen. Whitehouse joined Sen. Bernie Sanders (I-Vt.), Rep. Mark Pocan (D-Wis.) and colleagues in the Senate and House to introduce legislation Wednesday that would strengthen the middle class by restoring workers’ rights to bargain for better wages, benefits and working conditions.  The legislation has been endorsed by virtually every major union in America.

However, the rights of workers to join together and bargain for better wages, benefits, and working conditions have been severely undermined. Sixty years ago, nearly a third of all workers belonged to a union. Today, that number has gone down to 10.7 percent. When workers become interested in forming unions, 75 percent of private-sector employers hire outside consultants to run anti-union campaigns. An employee who engages in union organizing campaigns has a one in five chance of getting fired.

The Workplace Democracy Act would make it easier for workers to join unions in a number of ways.

It would end right to work for less laws by repealing Section 14(b) of the Taft Hartley Act, which has allowed 28 states to pass legislation eliminating the ability of unions to collect fair share fees from those who benefit from union contracts and activities.

Under the legislation, when a majority of workers in a bargaining unit sign valid authorization cards to join a union, they must have a union. Companies would not be allowed to deny or delay a first contract with workers who have voted to join a union. Unions would be given the right to have their voice heard through secondary boycotts and picketing. And workers would have the right to know when their company spends millions of dollars running anti-union campaigns.

The bill would also stop employers from ruthlessly exploiting workers by misclassifying them as independent contractors or denying them overtime by falsely categorizing them as a “supervisor.”

Click here to read a summary of the bill.