The announcement follows organizing efforts from employees at all five (5) locations where an overwhelming majority of café workers delivered letters requesting union recognition.

Grace Harvey, a barista at the Broadway location, stated, “We’re so excited that Seven Stars has chosen to voluntarily recognize our union and that we’ll soon begin negotiations. This would not have been possible without the support we have received from the community. We value the strong connections we build with our customers each day and appreciate all of their continued support.”

Natasha Brennan, a barista at the Point St. location, added, “I am so excited about our recognition from the company. All of us love our jobs and love each other. As Seven Stars continues to grow with more locations, we want ourselves and our future coworkers to have better protections, wages, and benefits. Unionization ensures this for everyone.”

Sam Marvin, Director of Organizing at UFCW Local 328, added, “We are so proud of the solidarity Seven Stars workers have shown for each other throughout this process. This would not have been possible without their strength, courage and commitment. We welcome and applaud the company’s decision to recognize the workers’ request and look forward to productive negotiation sessions that will strengthen both the futures and workplaces of Seven Stars workers.” 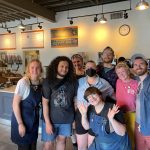