On May 12th, as our nation’s legislators prepared to vote on the controversial free-trade pact known as the Trans Pacific Partnership (TPP), UFCW’s International Union put out the following message to its 1.3 million members: 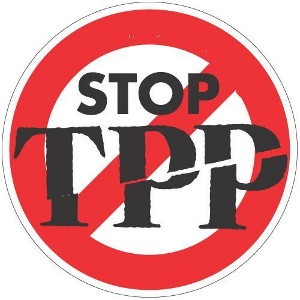 ” For weeks, UFCW members have been ramping up the fight against fast track and the Trans Pacific Partnership (TPP).

Today, this unfair trade deal, which will hurt hard-working men and women and our economy if passed, faces a cliffhanger vote in the Senate.

Fast track is too close to call.

You can make a difference by calling your Senator today to tell them to VOTE ‘NO’ on fast track.

Without any provisions that help workers or that enforce labor protections, fast tracking the TPP would be a disaster.

President Obama and the Republican and Democratic Members of Congress who want to pass this trade deal are choosing to ignore the brutal reality that hard-working families pay the price for unfair trade.

However, you can help sway Senators who are on the fence. Call them now and tell them to VOTE NO on fast track.

Now, more than ever, we need to speak out and help stop policies that hurt workers, their families, and our shared future. Your voice matters.”

The bill was halted on the Senate floor. Following the successful filibuster, a major win for opponents of the free trade agreement, UFCW President Marc Perrone put out the following statement: 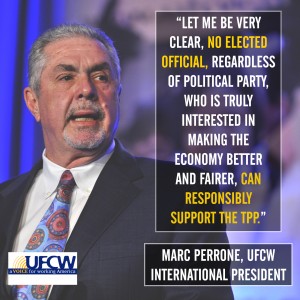 “All across this country, hard-working Americans from every political stripe have sent a message loud and clear—no more trade deals that destroy American jobs and families. The failure of the Senate to advance fast track legislation is not only a stinging defeat for supporters of the Trans-Pacific Partnership (TPP); it makes clear that the American people will not be fooled into supporting another bad trade deal.

“Just a few weeks ago, all of the pundits believed that fast track and the TPP were a lock to pass: they were wrong. Our 1.3 million members, the entire labor movement, progressive Democrats, and conservative Republicans have all stood up and spoke out against this disastrous trade deal. More importantly, this is what is possible when we all stand together and fight for what is right for our families, our jobs, and our nation. While this battle is far from over, we can only hope that President Obama and every TPP supporter hears the voices of the American people and understands that this is a fight they cannot and should not win.”

President Perrone was right in stating that the battle was far from over. On Wednesday, May 13th, Senate leaders found a way to get around the roadblock put up by opponents of the bill. Beginning today, individual provisions of the TPP will be put to a vote on the Senate floor first, followed then by the large scale fast-track agenda. For a better idea of why this trade agreement is harmful to our economy, check out this fact sheet. We need to continue to make our voices heard over this disastrous piece of legislation. Reach out to your elected officials, and make it clear that you will not tolerate the passage of the Trans Pacific Partnership, and that a vote in favor of the bill is a vote against working families.