This week, UFCW International President Marc Perrone led a Retail Food Conference in Chicago, where UFCW staff members from across the United States were in attendance. The conference covered an array of topics, from organizing, to collective bargaining strategies, and featured a number of workshops on contract language, right to work, and union shop servicing. The central message of the conference was simple: We must continue to stay on the offensive and take the fight to corporations across the country that have, for too long, made millions in profits while providing few benefits to the workers who helped create them. 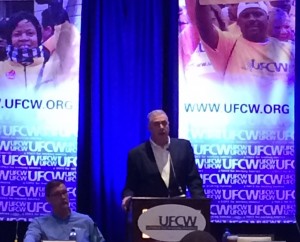 Since the Great Recession, the top 1% of the wealthiest Americans have captured 91% of all new income. In addition, 76% of Americans are living paycheck to paycheck and of that number, almost a third of them don’t have any savings at all. Considering that the majority of our economy is consumer driven, we need to fight to get money back into the pockets of hard working Americans, who will in turn spend it, increasing demand, and subsequently creating even more jobs to keep up with that demand. Not only do workers deserve an increase in wages, but also the opportunity to take a paid vacation. Less than half of low-wage earners in the U.S. have paid time off. Workers also deserve to have paid sick time. Every worker should be able to call out sick without worrying about being disciplined, and no worker should live in fear of not being able to make ends meet if they do get sick. Workers also deserve to have access to affordable health care and the opportunity to have a pension. The best way to balance the scales between corporation and worker is by unionizing and giving a voice to those who have gone far too long without one. When workers unite, their power at the negotiating table increases. UFCW Local 328 is committed to continuing to negotiate contracts with improved benefits for the over 12,000 members we represent, and to continue to organize those who desire a positive change in their own workplace.