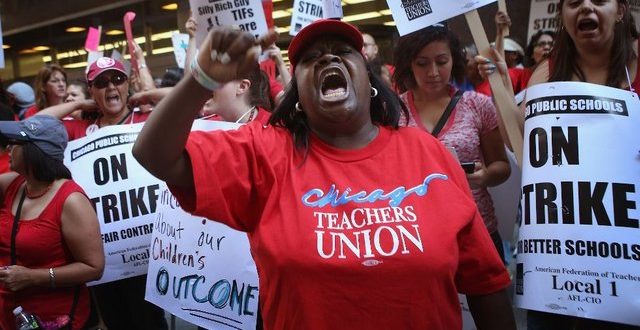 WASHINGTON, D.C. – In a Labor Day op-ed in The Hill, Marc Perrone, president of the United Food and Commercial Workers International Union (UFCW), makes clear why unions – not politicians – will create the better America that hard-working families deserve.

As the wealthiest elites celebrate a booming stock market and corporate America rejoices in a tax cut windfall, millions of hard-working Americans are struggling to survive.

If you aren’t personally feeling this way, then consider yourself lucky. The facts show that income inequality is not just threat to America, it is a brutal reality that endures.

According to the most recent report from the Labor Department, from July 2017 to July 2018, the cost of living was up 2.9 percent, while wages were up only 2.7 percent. This means that wages for many are failing to keep up with inflation as the cost of health care, prescription drugs, gasoline and housing continues to soar.

According to the Economic Policy Institute, one in nine workers are struggling in jobs with earnings that fall below the poverty line even when working full-time, which may explain the brutal fact that more than half of Americans have less than $1,000 in savings.

Meanwhile, as hard-working Americans are looking for ways to keep their heads above water, corporate America’s profits are soaring. Profits at S&P 500 companies are up over 20 percent and have reached record levels.

Few Fortune 500 companies, other than those that the Trump administration chose to use as poster children to justify its multi-trillion corporate tax cut, have shared this windfall with the very workers that made them a success.

Then there are the emerging corporate barons, like Amazon CEO Jeff Bezos, whose company is fast approaching a trillion-dollar valuation even as it pays many of its workers poverty-level wages. Our economy is clearly rigged — not just politically, but more so economically.

From administration to administration, this economic cycle continues to reward the wealthiest corporate elites while working-class and middle-class workers are left to worry about how they will earn enough to pay for rent or buy a house, keep their families fed and save enough to retire and live in dignity.

While it would be easy to blame the Republican administration, we should not ignore the fact that few Democratic administrations have done enough to help empower the one method that is proven to lessen income inequality — strengthening the right of workers to join unions and negotiate a better life.

For decades, our elected leaders have sought to weaken unions, even as they permitted a concentration of wealth and a level of income inequality that now represents a clear and present danger to America. Yet, despite the divisive political climate, a pathway to change is emerging.

At some point soon, America’s hard-working families will cast politics aside and say enough is enough with the economic struggles they have had to endure. They will grow tired of empty corporate promises and realize the enormous value they have when they stand together.

This movement will be fueled by new technologies that are already empowering workers to organize and led by unions that are determined to prove value to workers.

Those cynics who believe that the very idea of a labor renaissance is built on false hope need to look to Missouri, where union and nonunion workers from all political stripes came together and defeated right-to-work Prop A by historic margins — the first victory against a right-to-work law in decades.

Hard-working Americans have had enough. As every day goes by, and our nation’s most prominent corporate elites continue to exploit working- and middle-class Americans, the seeds of change will grow.

As we saw in Missouri, the real power to change America for the better does not begin with joining a political party. Rather, it begins with workers joining a union and negotiating the better wages and benefits their hard work deserves.