Rhode Island Governor Gina Raimondo has taken an admirable and significant step in her ongoing effort to combat employers who violate labor laws. A new Workplace Fraud Unit has been formed out of the Department of Labor and Training, a decision the we here at Local 328 overwhelmingly support and applaud. This task force has already reached a settlement with Cardoso Construction LLC, which recently admitted to violating worker protection laws. The $730,000 payout in back wages, interest and penalties represents a phenomenal first victory for this unit, and sends a strong message that workplace violations and unpaid wages will not go unnoticed. As Local 328 makes its own strides in the community toward improving working conditions and holding employers accountable for their actions, we look forward to continuing our work with the Governor to improve the lives of working families across the state. Below is Governor Raimondo’s press release on the subject: 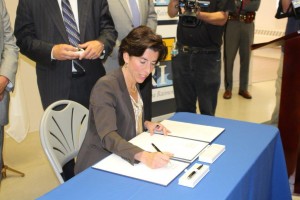 Governor Gina Raimondo ceremoniously signs into law a new minimum wage increase
for the state of Rhode Island at UFCW Local 328’s office in Providence in June of 2015.

A new Workplace Fraud Unit within the Department of Labor and Training’s Workplace Regulation and Safety division recently reached a settlement with a company that admitted to violating worker protection laws. Cardoso Construction LLC agreed to pay more than $730,000 in back wages, interest and penalties. This is the first significant action of this new unit.

“Everyone should be able to make it in Rhode Island, and workers should get a fair day’s pay for a fair day’s work,” Raimondo said. “We’re going to go after companies that cheat because breaking the law not only hurts workers, it also hurts companies that follow the rules, pay proper wages and help grow the Rhode Island economy. By ensuring fairness, we can expand economic opportunity for employers and workers alike.”

DLT officials found the violation on a drywall job at the University of Rhode Island. After investigating, they determined that the company should have characterized the workers as “employees,” but they were mischaracterized as “independent contractors.”

When employers misclassify employees as independent contractors, they harm workers, hurt other companies that play by the rules, and cheat taxpayers. By misclassifying workers, companies:

“It’s only fair to repay the employees who were underpaid for months on the job, and this agreement will achieve that,” said Raimondo. “Everyone must compete by the same rules on public projects in Rhode Island, and this settlement is sending the clear message that we will be cracking down on abuse.”

“Following the same rules as everyone else is not a barrier to success,” said DLT Director Scott Jensen. “We will continue to protect our community’s investment in our workforce, and we remain committed to helping Rhode Island companies grow their businesses and play by the rules. I also applaud the work of the Joint Task Force on the Underground Economy and Employee Misclassification, who along with the new Workplace Fraud unit, moved this case forward.”