After three months of negotiations, employees secure a first contract that raises wages and offers new and improved benefits for Seven Stars employees

Providence, RI – Today, United Food and Commercial Workers (UFCW) Local Union 328, which represents 11,000 workers in a variety of industries in Massachusetts and Rhode Island, announced that the hardworking baristas, keyholders and restockers, employed at all five Seven Stars café locations in Providence, Rumford and Cranston, voted unanimously to approve their first contract. The agreement comes after three months of bargaining with the company. Over 100 workers at the cafes joined UFCW Local 328 in June 2022, with the goal of creating more equitable and sustainable futures at the cafes where they enjoy serving their communities.

The agreement, which marks the first of its kind for retail cafe workers in Rhode Island, contains major victories including:

Seven Stars employees displayed tremendous solidarity throughout the bargaining process and received overwhelming support from their communities and customers. In December, workers received over 600 signatures of support from customers in support of securing a fair agreement.

Charlie Saperstein, a barista at the Point St. location, said after the vote, “This contract victory shows, above all else, that workers have power! We have a real stake in this company and we are glad that will be recognized in our new contract. I am so proud of all of my coworkers for sticking together through this whole process — here’s to a better Seven Stars!”

Stephanie Walker, a keyholder at the Cranston location, stated, “I’m so proud of what we have accomplished and so grateful for the support of our community. I’m excited for how this first contract benefits everyone at my workplace!”

Chris Sullivan, a keyholder at the Rumford location, shared, “The solidarity that I felt during this endeavor was nothing short of incredible. Being a part of a larger movement was humbling and exciting all at once. We were floored by the support of our respective communities that we are lucky to serve each day. My favorite part of my job is interacting with the public, getting to know them on a personal level, and hoping to bring something more than just a cup of coffee. I’m excited that we’re going to be able to continue doing just that.”

Timothy Melia, President of UFCW Local 328, added, “I am so proud of the workers at Seven Stars.  They have demonstrated true union solidarity in forming their union and sticking together during these negotiations.  And because of that strength and commitment, they now have a contract that is an example for all workers across the country of what can happen when you stick together.”

UFCW Local 328 and the employees of Seven Stars extend their gratitude to the community for all of their support. This agreement respects and values the hard work by Seven Stars workers and the bonds they form with customers each day. We encourage everyone to visit their local Seven Stars café to congratulate the workers and celebrate this achievement! 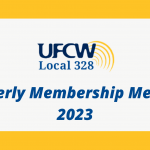