(PROVIDENCE, RI) – Today, the New England Council of the United Food and Commercial Workers (UFCW) union announced a series of rallies in the campaign for a fair contract for 35,000 Stop & Shop workers in New England. Following a rally of hundreds of Stop & Shop workers, customers, elected officials, and community supporters last week, Stop & Shop workers will bring the same energy to five more rallies before the Easter holiday.

New England Stop & Shop workers are currently working under an expired union contract while the profitable company insists on cuts to hard-earned benefits. Stop & Shop’s parent company, Netherlands-based grocery giant Ahold, recently announced operating profits for last year in excess of $1.4 billion. Today, Ahold and Delhaize shareholders are expected to approve the merger of their companies, which will be completed later this year. Prior to closing of the merger, Ahold shareholders will receive a payout of more than $1 billion.

While paying out dividends to foreign shareholders, the company is demanding that workers accept cuts to longstanding benefits, decreasing take-home pay and cutting future retirement benefits despite a fully-funded and secure pension fund. The company is further demanding that future workers be given second-rate benefits and pay, transforming Stop & Shop’s once middle-class jobs into low-wage jobs.

“Stop & Shop’s proposals show that the company has strayed from its core values,” said Tim Melia, president of UFCW Local 328. “This used to be a company that took pride in offering the best wages and benefits in the region, and attracting the best workers. Our members are only asking for their fair share of the success their hard work has built.”

Rallies will be held:

We are 1.3 million families standing together to build an economy that every hard-working family deserves. www.facebook.com/UFCWinternational  @UFCW 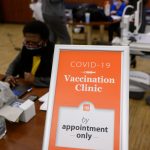 COVID-19 Vaccine Eligibility Expands to All Adults in Rhode Island, Massachusetts and Connecticut

A Reminder to Submit Applications for Our Scholarship Program! – Deadline is April 30th