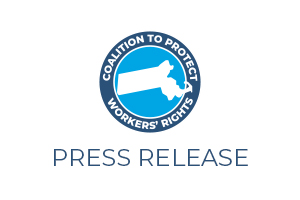 BOSTON – Uber claims that having “flexibility” at work means you’re not an employee. Don’t tell their HR Department.

To much acclaim, Uber’s Chief People Officer, Nikki Krishnamurthy, recently announced that, post-pandemic, Uber employees would have the flexibility to work from “wherever.” Krishnamurthy said Uber was expanding flexible work to give employees “an opportunity to explore new places.” The release stated Uber’s desire “to continue being a great place for our current and future employees,” which “means adapting to different needs and being creative about what is possible.”

If only Uber was so committed to its one million U.S. drivers, the backbone of the company, none of whom receive any of the generous benefits touted by their employer.

“Uber’s highest-paid employees can now work from a beach in Aruba, without even taking vacation,” said Beth Griffith, an Uber driver and Chair of the Boston Independent Drivers Guild, “but me and my colleagues can’t even earn a sick day to care for a child. Uber should follow the law and give all workers basic benefits.”

In Massachusetts, Uber has repeatedly claimed that the scheduling flexibility it offers drivers is incompatible with “employee” status, allowing Uber to pay drivers less than minimum wage, provide no state-mandated sick time, no employer contributions to Social Security, no mileage reimbursements, and no protections against injury, discrimination, or harassment.

“Uber falsely tells courts, legislatures, and its own drivers that “flexibility” is only for independent contractors, with no rights and no benefits,” said MIke Firestone, Director of the Coalition to Protect Workers’ Rights. “In reality, Uber offers flexibility to favored high-status employees, while cheating their drivers.”

The Coalition to Protect Workers’ Rights is a broad alliance of workers, civil rights, immigrant, faith, labor, community organizing, racial and environmental justice groups who believe that all workers in Massachusetts should be able to earn a decent wage, take care of their health, and protect against harassment and discrimination on the job. We oppose the $100M+ campaign by Big Tech companies to undermine our law, as they recently did in California through Proposition 22, to exclude workers from basic rights and exempt themselves from the obligations of every other employer.